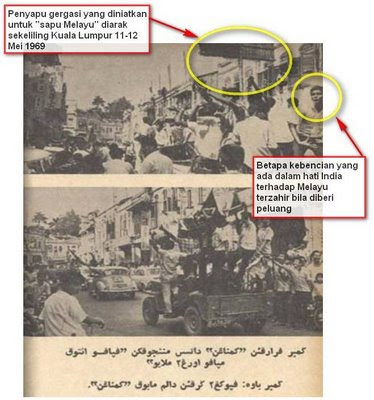 An Open Letter to all DAP Leaders and Members

DAP had never prepared itself to be the alternative of BN until 08 March 2008. And we have to acknowledge that DAP had been dragged and manipulated by UMNO to become or at least seen to become a Chinese-Chauvinist political party. The fact is that without PAS or Anwar Ibrahim, DAP will NEVER be able to engage the Malay electorate. The leadership of DAP has long been luxuriating in being recognized as the ‘Chinese Hero’ or ‘Non-Muslims’Rights Defender’.

Since DAP’s inception in 1966, the Party has failed to recognize the basic and simple fact that it is the Malays who decide the sort of leaders they want and they have voted UMNO in for 12 consecutive General Elections.

UMNO had always been perceived as the sole defender of Malay supremacy with their special rights and privileges, even if it is at the expense of other ethnic groups. It doesn’t require complex political analysis to understand that the MAJORITY of Malays had always been staunch supporters of UMNO.

If they refuse to change their voting preference, the status quo is going to remain. The more we challenge it, the stronger UMNO will be. Thus, for DAP to directly clash with UMNO will further enhance its image as a Chinese-based party and provide UMNO with an opportunity to have more Malay sympathizers.

An example is, if they increase the number of scholarships for non-bumis, UMNO can easily tell the Kampong Malays that they have succumbed to the pressure of MCA, Gerakan and MIC. The Malays will immediately give their strong endorsement to UMNO to defend their rights. DAP, as one of the strongest opposition parties in Malaysia, is still failing to comprehend the racial game played by UMNO.

Instead of directly engaging the Malay electorate, DAP chooses to play the ZERO SUM GAME with MCA and Gerakan. These 3 Chinese-based political parties lack the basic political wisdom to survive independently in our multi-racial country where Malays/Muslims are the majority. At least we know UMNO can easily survive by means of communalism and form the government with smaller political parties.

Instead of getting closer and winning the hearts and trust of the Malay electorate, DAP has chosen to fight with MCA and Gerakan to play the role of Chinese Hero.

Worse still, after struggling for more than 40 years in Malaysia’s political history, DAP still doesn’t have the slightest inkling of what ‘political courtship’ is all about. Even the MOST STUPID salesman knows how to be courteous to customers and win their trust.

DAP chooses to shun Malay electorate and frighten them by:

a) Refusing to wear songkok,
b) Raising the issue of Social Contract,
c) Immediate abolition of positive discrimination policies

It’s made me wonder whether DAP is paid by UMNO to strengthen their grass root supporters! If I were a DAP leader, I would ostentatiously wear the Songkok to pro-actively court and seek Malay support for DAP. I would put aside the issue of the Social Contract and would clearly and carefully pinpoint the weaknesses of the NEP to the Malay masses before revising it.

I can help organize special tours for all the Malays/bumiputras in Malaysia to visit all the Indonesian islands surrounding Singapore to see for themselves how the Malays there are living in abject poverty and sordid conditions. Many young girls in Batam, Bintang and Karimun have to prostitute themselves to feed their family. They are also deprived of the opportunity to receive basic education and training. And we know many of them have to leave their families to become maids in Singapore and Malaysia..

We should challenge UMNO - NOT to protect the Malays in Singapore, but the Malays in Batam, Bintang and Karimun! We are not defending Singapore, but we have to speak the truth to the Malay masses. Enlighten them and so they won’t be blinded and misguided by UMNO. Shame on our Education Minister who expressed the need to travel to the UK to save ‘our’ so-called prodigy Sufiah. He should go to Batam Island to join the UN’s efforts to curb child prostitution!

For DAP’s information, Singapore Malays have progressed very well. Over the last 15 years, they have improved significantly in their academic performance. Singapore Malays have the highest percentage of home ownership as compared to the Malays in Malaysia and Indonesia! DAP does not have to defend PAP, but I would encourage YAB Mr. Lim to invite Dr. Mahathir for a telecast debate on the plight of Malays in Singapore.

Dr. Mahathir always reminds the Malays in our country to look at the Malays in Singapore, how ‘miserable’ they are without firm control in politics. For Mahathir’s information, the Singapore Parliament Speaker is a Malay and the Finance Minister an Indian Muslim like Mahathir. And so far, I have not heard of Singapore Malays being maids in Malaysia or Indonesia, and neither have I heard of a large number of young Malay girls in Singapore prostituting themselves to feed their family.

As Islam is the official religion of Malaysia, DAP leaders should openly and publicly support the teachings of the Quran in our country. I voted for PAS on 8th March to close down casinos, horse-racing, 4D and TOTO. Non-Muslims have long been paying a second tax to the UMNO government by ‘gambling-off’ their whole family savings and children’s education to win the trust and respect of Malays and Muslims.

DAP should advocate the closure of casinos, 4D, TOTO, and horse-racing as all these vice activities operators are UMNO agents. They take gambling money from non-Muslims and pay it to their UMNO Master. To cut off this source of revenue for UMNO, DAP should explain to the non-Muslim community how this gambling system works in Malaysia - and teach UMNO a lesson as we must expose UMNO’s hypocrisy!

Unfortunately, DAP leaders don’t appear to have the intelligence, wit, courage and political will to have the paradigm shift and think out of the box politically. As mentioned earlier, DAP is just a political party helplessly manipulated by UMNO. By just simply advocating the banning of gambling, DAP could win the respect and trust of Malays and Muslims plus save many non-Muslims from bankruptcy and family problems. But most importantly, it cuts off a large chunk of revenue from UMNO. ONE stone killing 3 birds.

Instead of shouting and arguing with ridiculous Umnoputras in Parliament, I urge DAP to instruct each of their members to befriend at least 10 Malays to explain to them the challenge of this ever-changing globalized economy and how we have to work together regardless of race and religion for a better Malaysia. When the Malay mindsets change, Malaysia will change; and vice-versa.

DAP, hear me and hear me well. You may be sincere, but you are sincerely wrong in Malaysian politics. Go and study what made UMNO strong. Do your political analysis. Also, DAP, you must remember that PAS is your true friend, even though they talked with UMNO. They are righteous and godly people that won’t succumb to the temptation of money. That is not the case with Keadilan. Except Anwar and a few top leaders, many Keadilan people are still carrying the UMNO-DNA, as we have witnessed with the running dog Ezam and Nalla betraying the party.

DAP, you should acknowledge the fact that the special rights and position of Malays/bumiputras are enshrined in our constitution.. You have to respect it. You must have a complete and comprehensive Malay agenda to compete with UMNO. For example, the Penang state government can provide free but compulsory tuition for Penang Malay students at schools. DAP must cultivate and nurture the Malays in Penang to excel in academics and be able to compete on equal footing with others. Penang Malays must be the locomotive change of mindset to the rest of the Malays in our country. If DAP fails to change the Malay mindset in Penang, DAP will never be qualified to be addressed as a ‘National’ party.

Lastly, DAP, you still have a long way to go and you really have to learn again who’s given UMNO power. Go to their power base, seize their power and cut off their power supply! For a progressive and better Malaysia, wearing the songkok is a trivial matter.

If necessary, let Anwar’s new cabinet be full of capable Malays like Dr. Syed Husin Ali, Dr. Azly Rahman, Dr. Bakri Musa, Tuanku Abdul Aziz, etc. to prove to the Malay masses that we, Chinese, are not power hungry; we don’t choose to ‘pegang’ so as to destroy their livelihood as UMNO has claimed. We can prove to them that even though there is only 1 Chinese Minister in the Cabinet, it is still okay to us if the highly capable and honest Malay leaders can lead our country to greater heights and serve the rakyat wholeheartedly regardless of race, language and religion!

Please learn, understand and even master the UMNO’s Art of War in Politics.

FOR A BETTER MALAYSIA

Political power without Economic power is a shadow. The industrial and commercial mechanism is the means by which a country satisfied the necessaries of life according to its standards of living. Those who control a vital factor in it can, if they wish, obstruct or cut off the supply of the necessity and so being decisive pressure to bear upon the political authority.