LONDON: Tun Dr Mahathir Mohamad has called for a ban on the manipulation of “money to make money” to help resolve the global financial crisis.

The former Prime Minister said the main problem was that banks were empowered to create money out of thin air and lend money which they did not have.

He suggested that everyone should go back to producing goods and services although the profits would not be that massive.

“But the wealth from these activities will be real and the economy will be more sound,” he said in his talk at the “Leadership in Times of Crisis” seminar at the British Institute of Technology and E-Commerce here on Friday.

Dr Mahathir also expressed doubts of a recovery despite the US government talking of a trillion-dollar plan to save the economy. 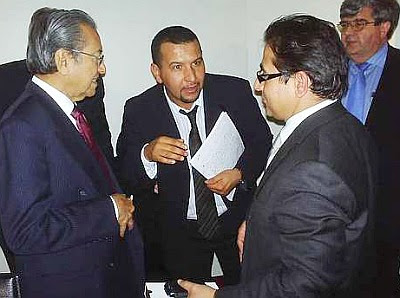 Exchanging views: Dr Mahathir chatting with the participants after delivering his speech at the British Institute of Technology and E-Commerce in London on Friday.
He said there would come a time when the government would have to admit that the whole system had failed.

What was needed, he said, was a total write-off of the monies lost and the need to reduce the lavish lifestyles and per capita income in rich countries.

“The rich will have to sell their yachts and private planes as well as their holiday and palatial homes while the poor will become poorer,” he said.

If there is to be recovery, the world must accept that everyone – the rich and the poor – must take part in formulating a change in the system, he added.

Dr Mahathir said the most important reform was to ensure that money was created by governments and not by banks.

“Governments need to come back and supervise the banks. If the executives go beyond something, they’ll be punished,” he said.

He described as ridiculous the present system where executives were paid bonuses if they could show figures to their directors even if the banks lose money.

Describing the scenario as frightening, he said: “We have no control over money and we don’t know how much of it is in circulation.”

Dr Mahathir said when Malaysia was hit by currency speculators in 1997-1998, it was told that the trade in currencies was 20 times bigger than the total world trade.

“That’s a huge sum of money. But where does it come from?” he said, adding it was important to get rid of those who were playing tricks.

He also said government bailouts, which were effectively nationalisation, would not enable businesses to recover when the economy was in recession.

“We see governments furiously bailing out financial institutions and businesses but we have yet to see any results,” he added.

He also said the formulation of any new system must involve both the rich and poor countries as well as elements of Islamic banking principles.

KUALA LUMPUR (Reuters) - Malaysia is not expected to sink into recession and the government is ready to further pump-prime the economy if conditions worsen, a local newspaper quoted Deputy Prime Minister and Finance Minister Najib Razak as saying.

"Malaysia will experience a slowdown in terms of economic growth, but we are not expected to slip into recession or even a technical recession," Najib, who will become prime minister in March, said in an interview with the Edge Weekly on Saturday.

"I am not adverse to putting in place another fiscal stimulus plan," he said.

"If the budget deficit goes up to more than 5 percent, it is still tolerable as long as it is for only one or two years."

Malaysia's economy is forecast to grow 3.5 percent next year, its slowest pace since 2001, from 5 percent projected for 2008, according to government forecasts. The government already announced this month a 7 billion ringgit (£1.37 billion) stimulus package.

The government has projected a budget deficit of 4.8 percent for 2008, but Malaysian Institute of Economic Research (MIER), an influential think tank, said deficit could hit a five-year high of more than 5 percent in the face of the global economic slowdown.

While falling crude oil prices would hit Malaysia, a net exporter of petroleum, the government hopes to boost federal revenue by selling state assets to government funds, such as the Employees Provident Fund, said Najib.

"We are looking into ways and means to have some latitude in terms of the government's fiscal position should the external environment get any worse," the paper quoted Najib as saying.